I have short story for you for today. And how it is mostly with stories, there will be not that much comments . Commenting I’m leaving for you:P. I will just say that for me the level of complication whole that adventure was surprising.

As some of you know, we live in quite big flat at Kirova street. What is important for the story, the flat consist of two smaller, combined into one big. Also, the arrangement of the rooms in the flat is completely different than it was. In the bathroom there was also a kitchen before, kitchen was divided into bathroom, kitchen and something else. How it is with the rest of the rooms I have no idea, I haven’t seen any other flat in our block, but probably also changed. Result of it is that we have big and nice place to live. So that was small description of the flat. So now let the Gas Story begin:

The end of February, Thursday. There was big gas leak found somewhere close to our block. It was no problem, nothing dangerous for us, but as it needs to be done, ГорГаз decided to control the condition of installations in whole neighborhood. And that is the moment since when problems started.

Gas was cut off because of the leak, but just after control ladies saw what was done with gas pipes in our bathroom during last repair works, they said, that gas is not going to be back until everything in our flat will be done as it need to be.

First of all, all installations  in the bathroom and in the kitchen were illegal. Nobody checked it after it was done by construction team, what is more, it looks like they had no idea how to make it right, or just they wanted to plug everything in the cheapest way it was possible. Nice way of dealing with gas in the big house, right? It’s not allowed and totally unsafe to put gas БОЙЛЕР in the bathroom, or to have gas pipes hidden deep in the wall. We, of course had it that way.

Moreover, I found something really interesting in the bathroom during making small demolition together with our neighbour Паша: in one place instead of small and cheap thing called ЗАТЫЧКА there was just a piece of gips in the gas pipe. I guess I don’t need to say how shocking for us it was. 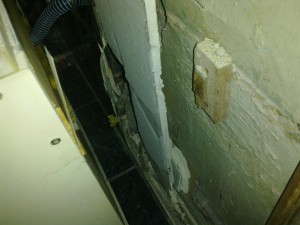 Ok, one time we had small explosion there.  I lost some of my hairs then, actually nothing worse happened, but looks like whole time there was a danger of bigger BUM. With fireworks and flames.

And how it was with fixing the problem: During almost two weeks almost everyday (except weekend) we had a guests (:D) in the house. It was, as Piotrek counted, about 20 of different people, starting from ГорГаз repairing crews, landlady and her husband, to controlling ladies and neighbors. From some of them we were getting papers to sing (as we are not owners, our signs there were not valid, but we were signing anywayJ), from the rest instructions what needs to be done with pipes, and how всё узаконить. Of course in specialist language and very fast.

On the end, after 12 days, the Gas Story was over. Now everything is working and it is done in a proper way. Finally we had free bathroom and hot water there. The great relief for us of course, but also for neighbors living under and above us. Now we hope there will be no problems anymore. And what can I say, it was a good show of building in really cheap way and not caring about possible consequences.  Like somebody said: человек учится всю жизнь. And now after whole that I feel I know about life here a bit more. 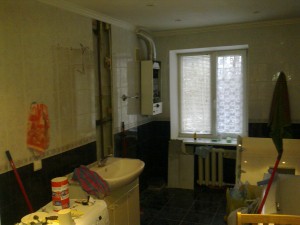